For those who don’t know about riding scooters (yeah, that was us until the purchase of our scooter, dubbed “Buttercup”), when you ride 2 up, the passenger is called either R2 or cupcake.  Yes, you read that right, cupcake.  And yours truly has now had her first real experience riding cupcake!  Joshwa and I have ridden a couple of short trips on our scooter in the last week or so since we had the maintenance done on Buttercup – around our neighborhood for our first 2 up ride, and into town a couple of times.  But no more than a few miles each time.  Today we went on a RIDE.

We didn’t really have a destination in mind when we left out this afternoon.  We just figured we’d ride and see how we felt, maybe make it to Centreville (the next town down Hwy 25 from our little town).  Well, we got to Centreville and into Brent.  We pulled over to see how we were feeling and we decided we were getting hungry, but nothing we’d seen yet really was appealing.  So we kept going.  And we scored BIG.  We found a place off Hwy 5 (what the road became when 25 veered off to the side) called Whillard’s BBQ & Grill.  It’s just a small building with a small sign.  We were actually going to stop at the gas station next door when we saw the sign.  So, we stopped in.

It’s a pretty small place and it had…character. 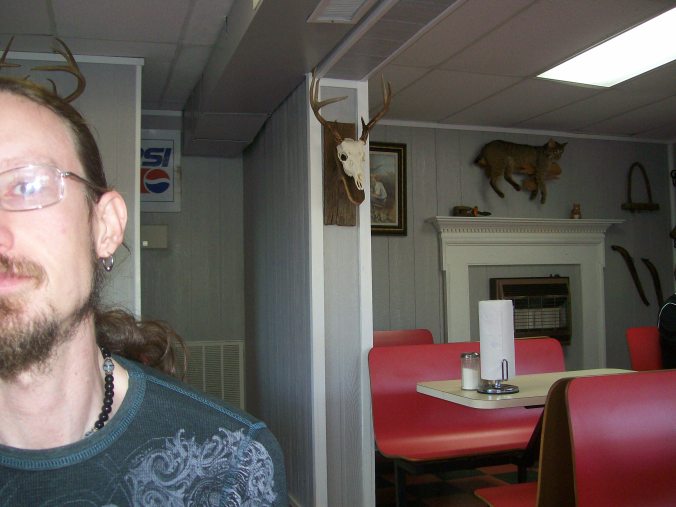 I had the brisket sammich and Joshwa had the double bacon cheeseburger.  And I ordered onion rings and Joshwa ate half of them.  He can get his OWN next time.  Those were the best onion rings I’ve EVER had!  And the sammiches were huge.  We paid just under $20, and it was worth every penny.  Their sweet tea reminds me of my Aunt Sharon’s sweet tea – and that’s the greatest compliment I can give sweet tea.  We were very happy we happened to stop in!  After we ate, we were sitting outside before we continued on our way and talked to the cook.  Now, let me say – there were two ladies working there – our waitress/the front counter lady, and the cook.  And both of them were WONDERFUL.  Definitely added to the experience.  But we sat outside for a bit, talking to the cook, and learned that the place had only moved into the building a year before – prior to that they had worked out of a trailer, selling at ball games and other events.  THIS trailer, where they still cook the meat.

It made me think of home, and so did the food.  Okay, so no, the barbeque sauce wasn’t the same as my beloved Rose’s Bar-B-Q in Hattiesburg, but I’ve learned nowhere and no barbeque sauce will ever hold the same place in my heart and taste buds as Rose’s.  But this place is now on my must-return list.

Now, after we ate, we were ready to saddle up again and we started heading home.  Since I had finally relaxed into riding, I just had to take some pictures of us riding.  After a few snaps, I was caught up in just riding again, so we stopped so I could put the camera away (learned a little further down the road that I could slip it in and out of my pocket without losing my seat or bothering Joshwa).  Well, while we were stopped, I saw a sign for Selma – a place we’ve gotten close to several times in our rambles, but that we’d never actually made it to – so I suggested we go down that way.  And because we were high on riding, we decided to go for it.  And I’m glad we did.  Because it was just beautiful riding.  And I couldn’t resist the sigh of our shadows on the road, so – more pictures!

Well, once we got to Selma, it took some figuring to get back heading north, but after only a short side trip (missed our turn), we were headed north on Hwy 22, a road we’ve been down several times.  But we underestimated how far from home we were – or rather overestimated how much sun we had left!  Not long out of Selma, the sun set – and it was beautiful to watch from the back of our scooter.  But we headed into Maplesville in the dark.  We stopped off at G & H Home Improvement because I needed a break – by that time, my back was aching and my feet were bothering me.  Well, good thing we did!  We called my Momma since today was her and my Daddy’s 30th anniversary (happy anniversary, Momma and Daddy!) and while I was talking to Momma, Joshwa realized there was someone at the store (which we thought was closed and empty.  So when the gentleman came around to the front of the store to unload, Joshwa stopped to talk to him – mostly making sure we were bothering him by stopping there.  We ended up having a nice conversation with him and Joshwa mentioned we were going to be needing gas before too long.  He let us know that the gas stations in Maplesville were closed, so we’d want to turn back a few hundred yards to get gas there before we moved on.  Which, I have to mention, we’re currently getting 48 mpg!  Woot!

So we gassed up and finished the last leg home, about 20 miles or so.  I’m aching, but oh MAN!  I can’t WAIT to do it again.  We’ve got a few things to do for the next couple of days, but I’m hoping to take another trip on Friday.  For those that don’t know, my Joshwa lost his grandfather last week and he took his bereavement days this week.  It worked out to fall between his off days.  Now, I know some might look at us taking these drives as abusing his bereavement days.  I’d say those people don’t know shit about my husband.  Because he grieves in his own way – everyone has their own way of grieving, some ways are more common than others.  But as someone who lost grandparents in recent years, I understand that you can’t grieve the way others do.  It just doesn’t help.  So if my Joshwa wants to spend every single day of his bereavement time on that scooter, then by the Gods, I’ll be perched up on the back of it with him.

Sorry.  Had to say it, because he was already worried about someone saying something to him about it.  I just hope if someone has something to say, they keep it to themselves or say it to me.  Anyway.  So we managed a 138 mile trip today in just over 5.5 hours – including stops.  Later this month, we’ll be driving to Hattiesburg for our friend, Austin’s wedding and my Momma’s birthday.  That’s a little more than 100 miles further than today’s trek, so we’ll definitely be riding every opportunity to help us build up our riding stamina.  We can totally do this, and I’m looking forward to.